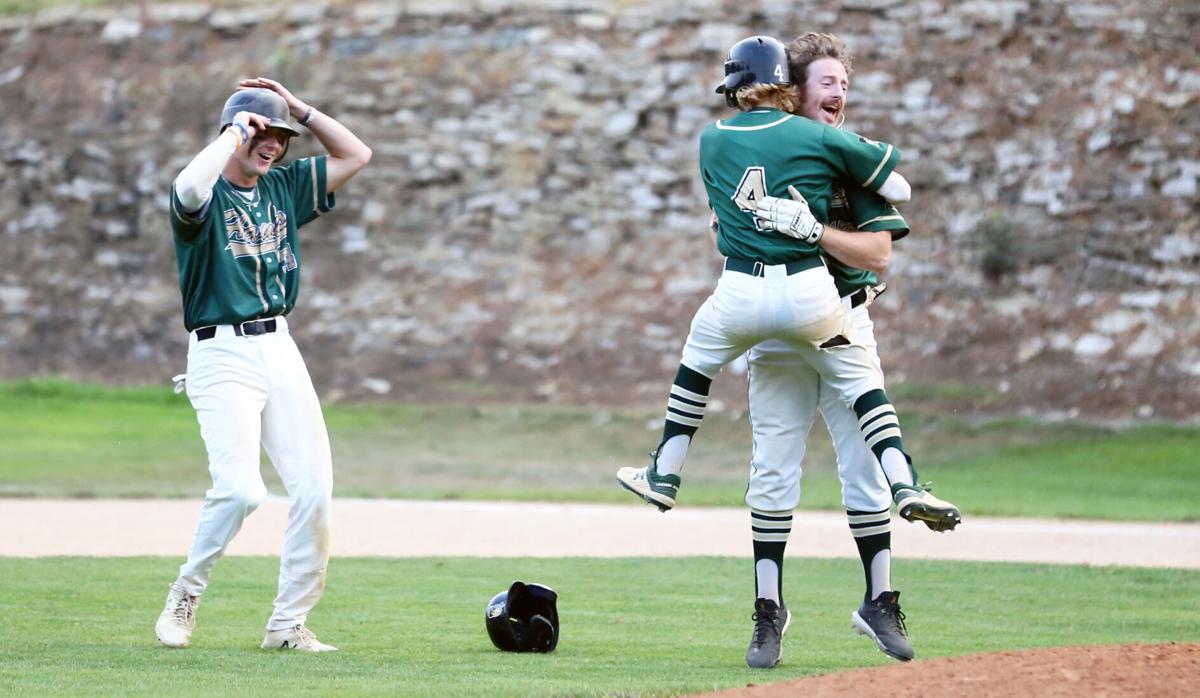 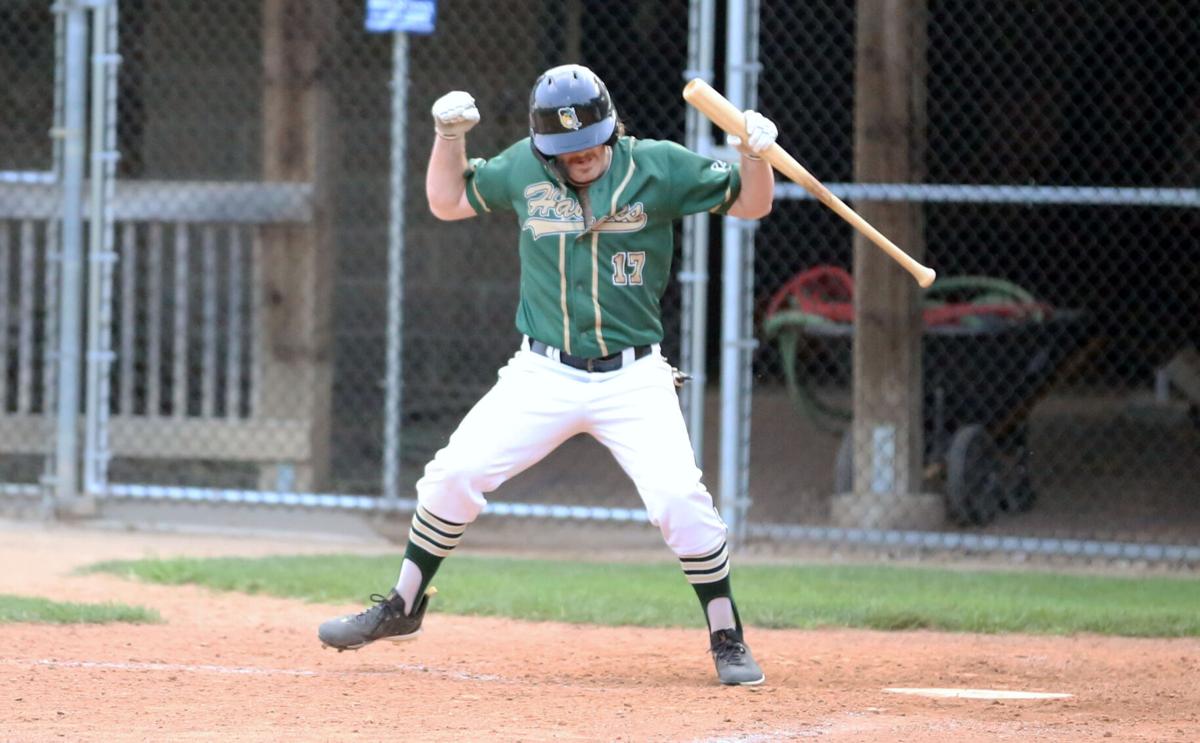 Jordan Jeske celebrates his two-out, walk-off hit by pitch with the bases loaded that brought in Cory Wolters to give Hastings the 4-3 win. Alec Hamilton / Hastings Star Gazette 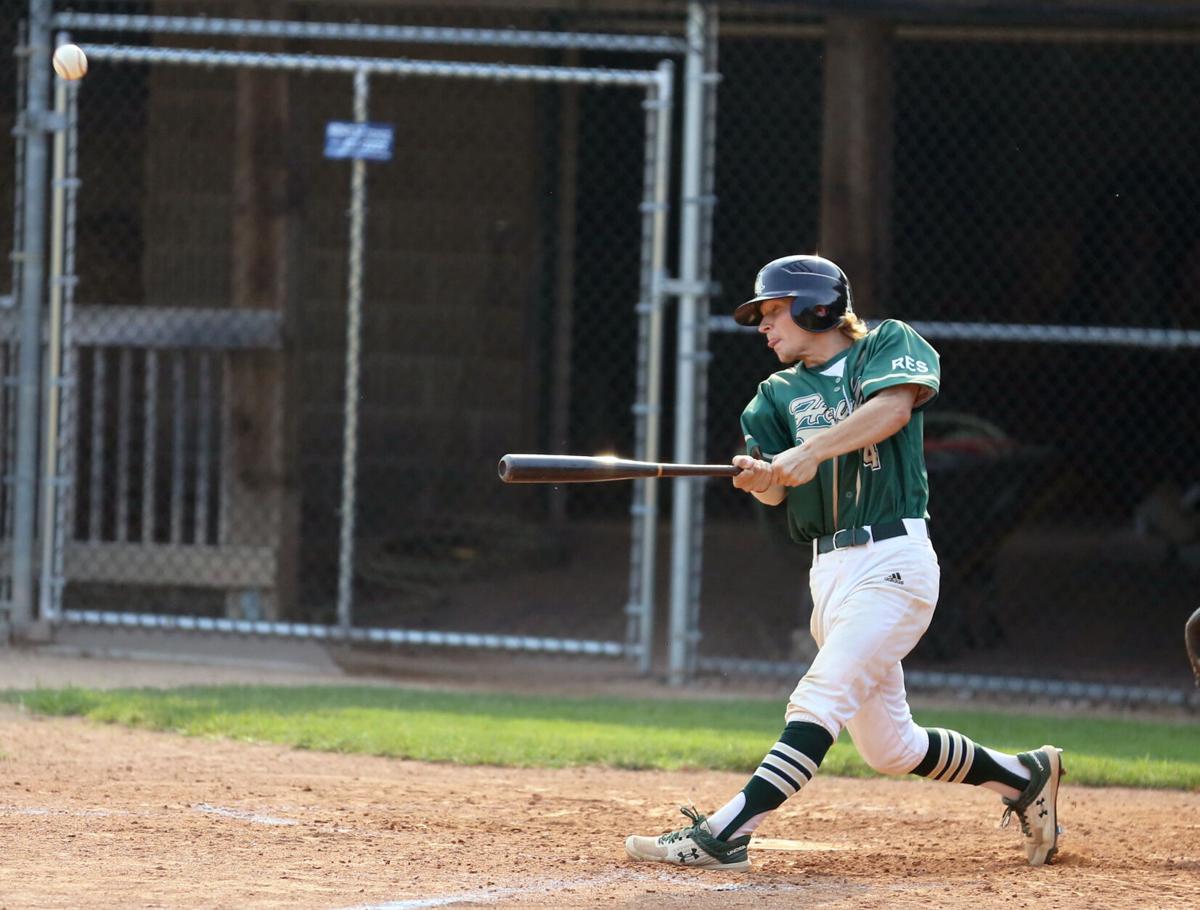 Hastings' Jason Greeder launches a two-RBI double off of the left field fence in the fifth inning to give the Hawks a 2-1 lead. Alec Hamilton / Hastings Star Gazette

The Hastings Hawks might be the hottest team in Region 5C heading into the Finals with an opportunity to go to the Class C state tournament on the line. The Hawks have won seven straight going back to the beginning of July, including three wins in the Region 5C preliminary bracket.

Hastings beat the Pine Island Pioneers, Austin Greyhounds and the Stewartville-Racine Sharks on their way to a preliminary bracket championship and the No. 5 seed in the Region 5C Finals. They will play the No. 4 Cannon Falls Bears in the first round on Saturday, August 7, at John Burch Park in Cannon Falls for the 1 p.m. game. The Region 5C Finals bracket is an eight-team, double-elimination tournament where the first, second and third-place teams move on to the Class C state tournament.

The Hawks beat the Pine Island Pioneers 13-3 in eight innings on Wednesday, July 28, at Veteran’s Field in Hastings during the first-round of the Region 5C Preliminary games. he Hawks scored three runs in the bottom of the sixth, four in the seventh and three in the eighth as spectators were treated to an incredible lightning show from storms that went south of the city.

For a more detailed report of how Hastings walked it off against Austin this past Saturday, continue reading below. They went on to beat Stewartville-Racine 3-0 in the preliminary championship to earn the No. 4 seed in the finals.

The ending of Saturday’s Hasting versus Austin semifinals game was one of the more weird outcomes fans will ever see. With the bases loaded and two outs, Jordan Jeske came up to bat for Hastings and was hit on the thigh to bring in the winning run for a walk-off hit by pitch. Early on, the game looked like it would be a pitcher’s duel as starters Will Lavin for Hastings and Drew Copley for Austin did not allow a hit the first three innings. However, both teams were able to get their offenses going to deliver what turned out to be a great game.

Lavin was absolutely lights out the first three innings as he struck out eight but also walked three. Those walks proved to be a problem as he walked Josh Molina, the leadoff batter in the top of the fourth, who came around to score on an RBI single by Tony Ciala to give Austin a 1-0 lead. Lavin then walked two more batters before getting the final out with the bases loaded.

Hastings responded in the bottom of the fifth after Andrew Kemper relieved Lavin in the top half of the inning. Isaac Flynn and Jake Sandquist had back-to-back singles to start the inning and both came around to score on a two-RBI double off the left field wall by Jason Greeder. The Hawks held that 2-1 lead for just a few minutes as Austin tied the game in the top of the sixth after Angel Santiago was hit by a pitch, went to second on an error and to third on a passed ball and then scored on a fielder’s choice from Copley. An inning later the Greyhounds took a 3-2 lead on a solo home run by Miguel Castro.

Hastings came back to tie the game in the bottom of the eighth when Greeder led off with a single and scored on an RBI-single from Blake Warner after he advanced on an error that allowed Josh Hawksford to reach safely.

The game was tied 3-3 heading into the bottom of the ninth. With one out, Simon Hedin led off with a single, Cory Wolters walked and Greeder singled. The Hawks had the bases loaded with one out when Josh Hawksford hit a ground ball that allowed Austin to get the force out at home but could not turn the double play. Then with the bases still loaded, Jeske took one for the team to walk-it off 4-3.

Greeder continues to be a spark for the Hawks offense. After going 3-for-5 at the plate with two RBIs Wednesday against Pine Island, he went 3-for-5 again against the Greyhounds with two RBIs, a walk and a run. Warner was 2-for-3 with an RBI and a walk while Flynn, Sandquist and Hedin all had hits as well. Austin only managed three hits all game -- two of which brought in runs -- from Teyghan Hovland, Castro (solo home run) and Tony Ciola. Most of their baserunners came on walks as Hastings issued nine free passes.