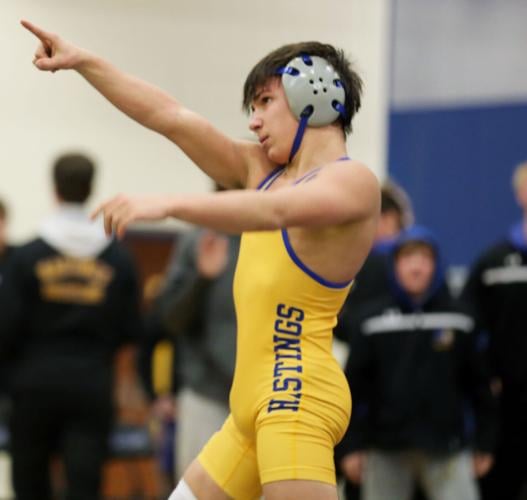 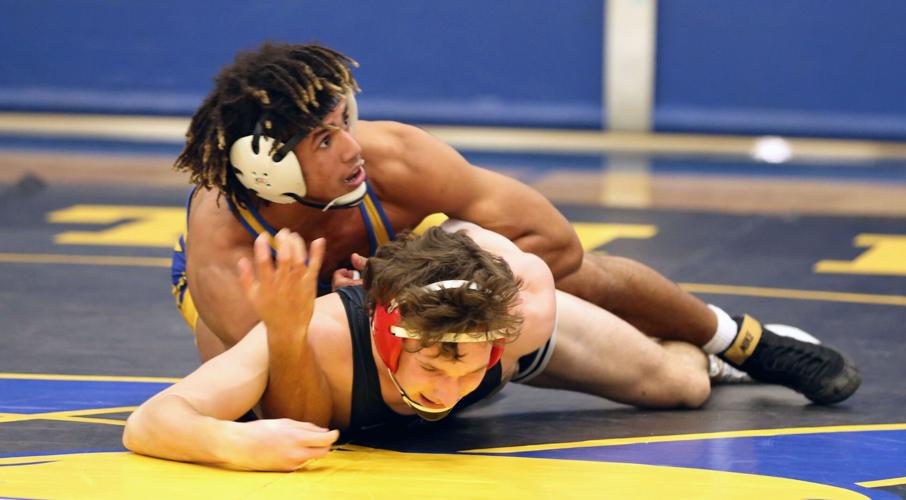 Hastings Raiders wrestling went toe-to-toe with the top-ranked in Class AA Simley Spartans Thursday night and gave the Spartans everything they could handle. While the result was a 35-30 loss for the Raiders, who are ranked No. 8 in Class AAA themselves, they showed they can challenge the best that Minnesota has to offer. It was Hastings’ best result against Simley in years.

“Probably four or five years,” said head coach Tim Haneberg on how long it has been since Hastings wrestled Simley so close. “We had a stretch there for about three years in a row where we were very, very close to beating them. Tonight I thought we had a small chance to beat them, they’re a very good team, obviously. There were a couple toss-up matches in there, if we could have got an upset in a couple. At the end if you look at the score, we wrestled our butts off all night long.”

Trey Beissel fell by a 6-0 decision at 106 pounds to Austin Gryzwinski to start off the duel and then came the most electric match of the night. Hastings’ Blake Beissel, ranked No. 1 at 106 in AAA, went to triple overtime against Brandon Morvari, the top-ranked 106 wrestler in AA, at 113 and pinned Morvari in 7 minutes, 56 seconds, during triple overtime. Hastings led 6-3.

At 120, Mark Svoboda held on against the No. 2 wrestler at 120 in AA, Peyton Spychalla, and lost by just a 7-1 decision. Svoboda was one of several Raiders who fought and saved their team points by not getting pinned.

“I thought maybe, 106 was a bit of a toss-up match and we ended up losing that one. But for the most part, the matches that we were not favored in, we battled very, very hard,” Haneberg said about how he expected the duel to go. “Mark Svoboda against one of the better kids in the state, he keeps it to a decision. Then at 145, we got majored there against a very tough kid, and then at 170, Ian Pepple, wrestles and gets a late takedown and the kid wins just by a major decision, the kid is ranked No. 1 or No. 2 in the state. We talk about it all the time, saving points and getting bonus points.”

Hastings dropped the next three matches at 132, 138 and 145 as the Spartans built their lead to 21-9. However, the Raiders made a comeback by winning the next two matches. Aiden Erickson beat Vristol Short by a 5-0 decision at 152 and Zander Hallis pinned Danny Martin in 5:40 at 160 to cut the deficit to 21-18 Simley.

Simley proceeded to win the next two matches to put the duel out of reach. Blake Clemons received a forfeit at 285 for Hastings and 35-30 was the final.

The Raiders travel to Bloomington Kennedy for a tournament on Saturday, Jan. 22, and then host a triangular with Prescott and Centennial on Thursday, Jan. 27. That night is also Alumni Night and Haneberg said they are expecting almost 100 Hastings wrestling alumni to be there.

Below are full results for the duel: