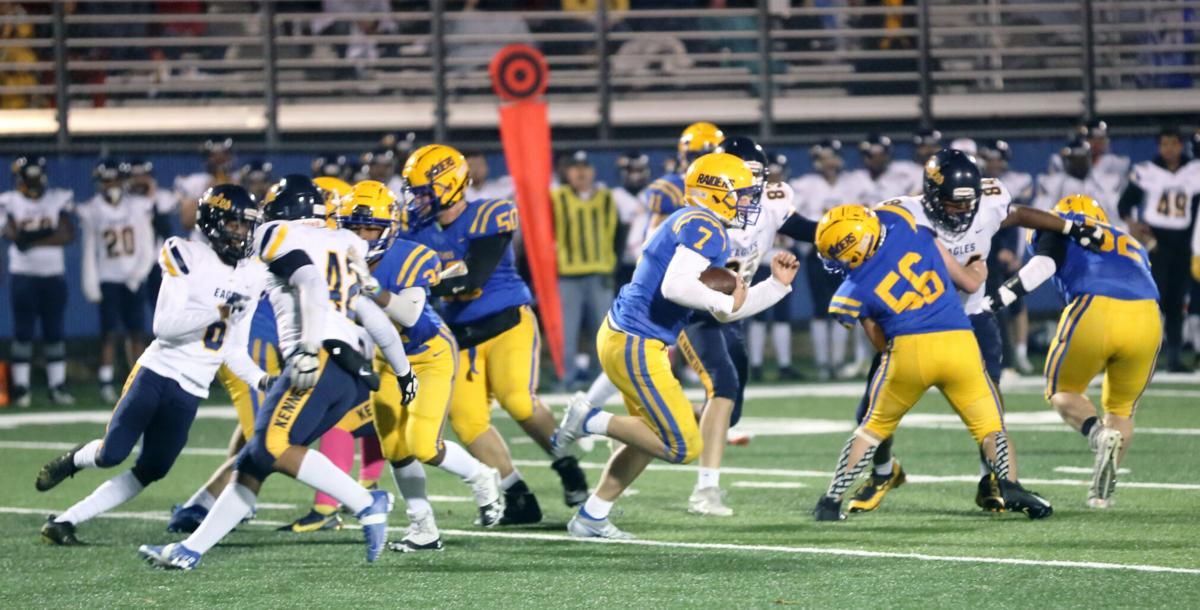 The Hastings Raiders ran for over 300 yards and four touchdowns in their 42-20 win over the Bloomington Kennedy Eagles Saturday night. Here senior quarterback Axel Arnold scrambles. He ran for over 60 yards and two scores in the win. Alec Hamilton / Hastings Star Gazette 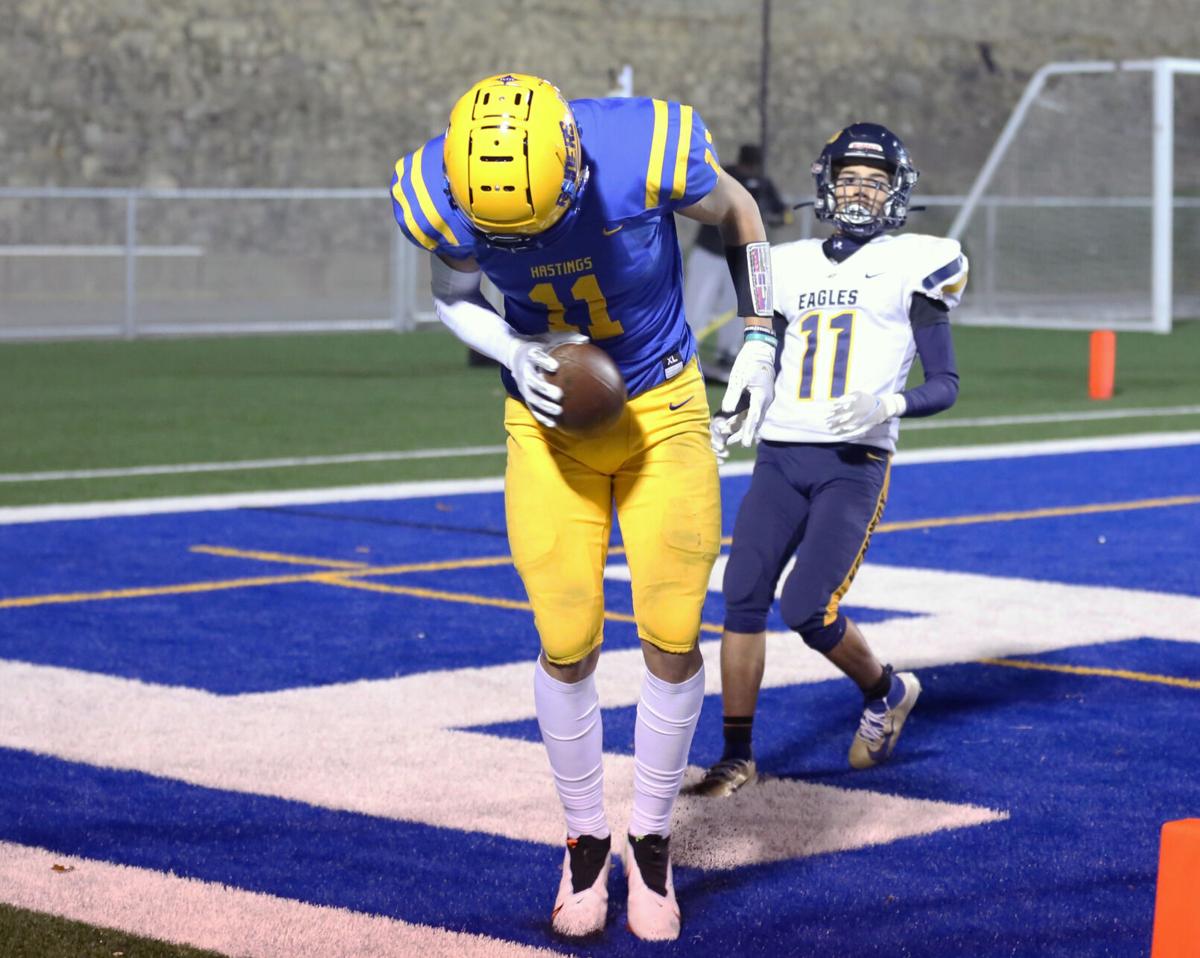 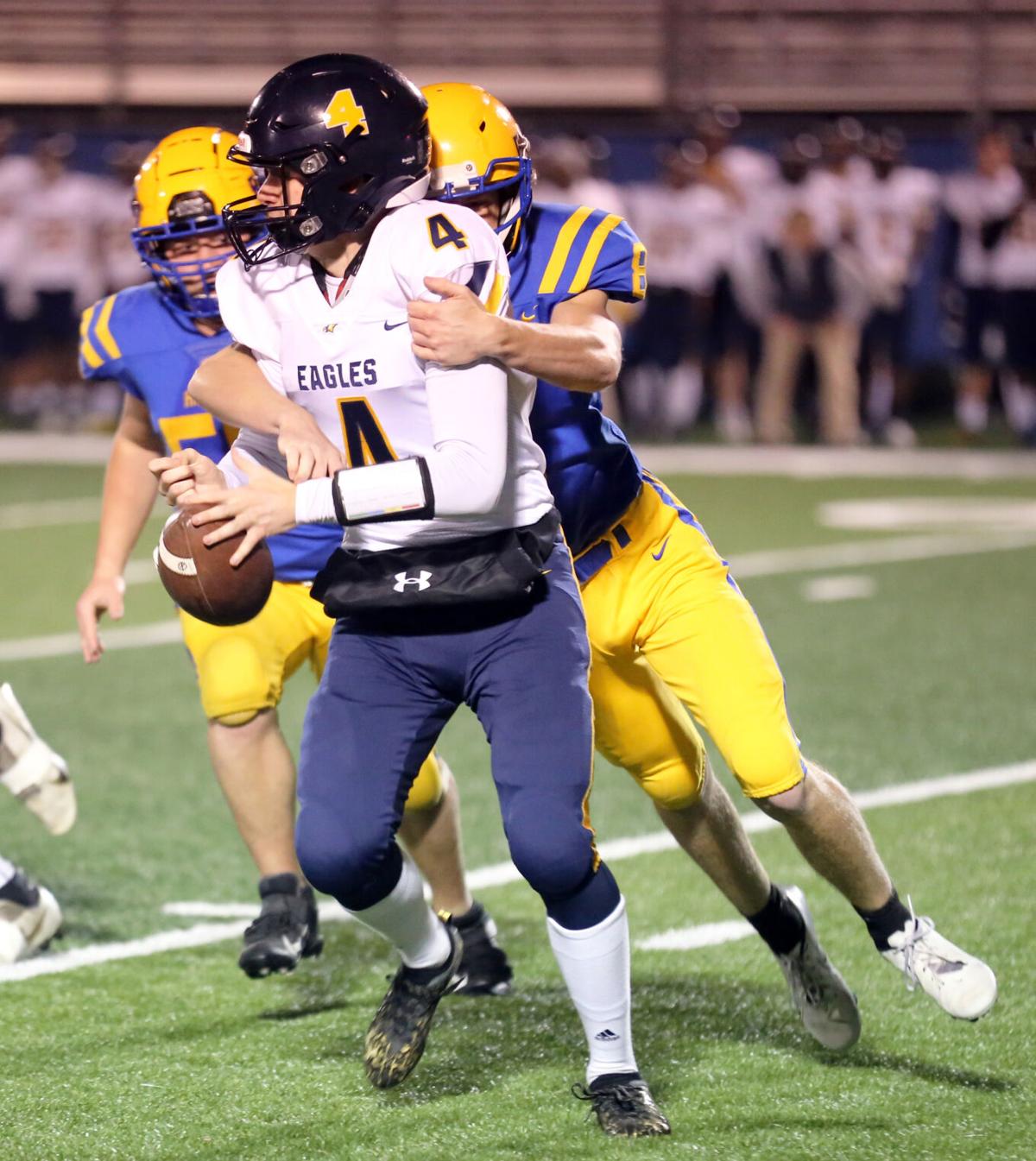 Hastings senior Will Meyer (8) sacks and strips Bloomington Kennedy quarterback Zachariah Zesch. The Raiders recovered the fumble, which set up their fourth score of the game and established the blowout with a 29-0 lead. Alec Hamilton / Hastings Star Gazette 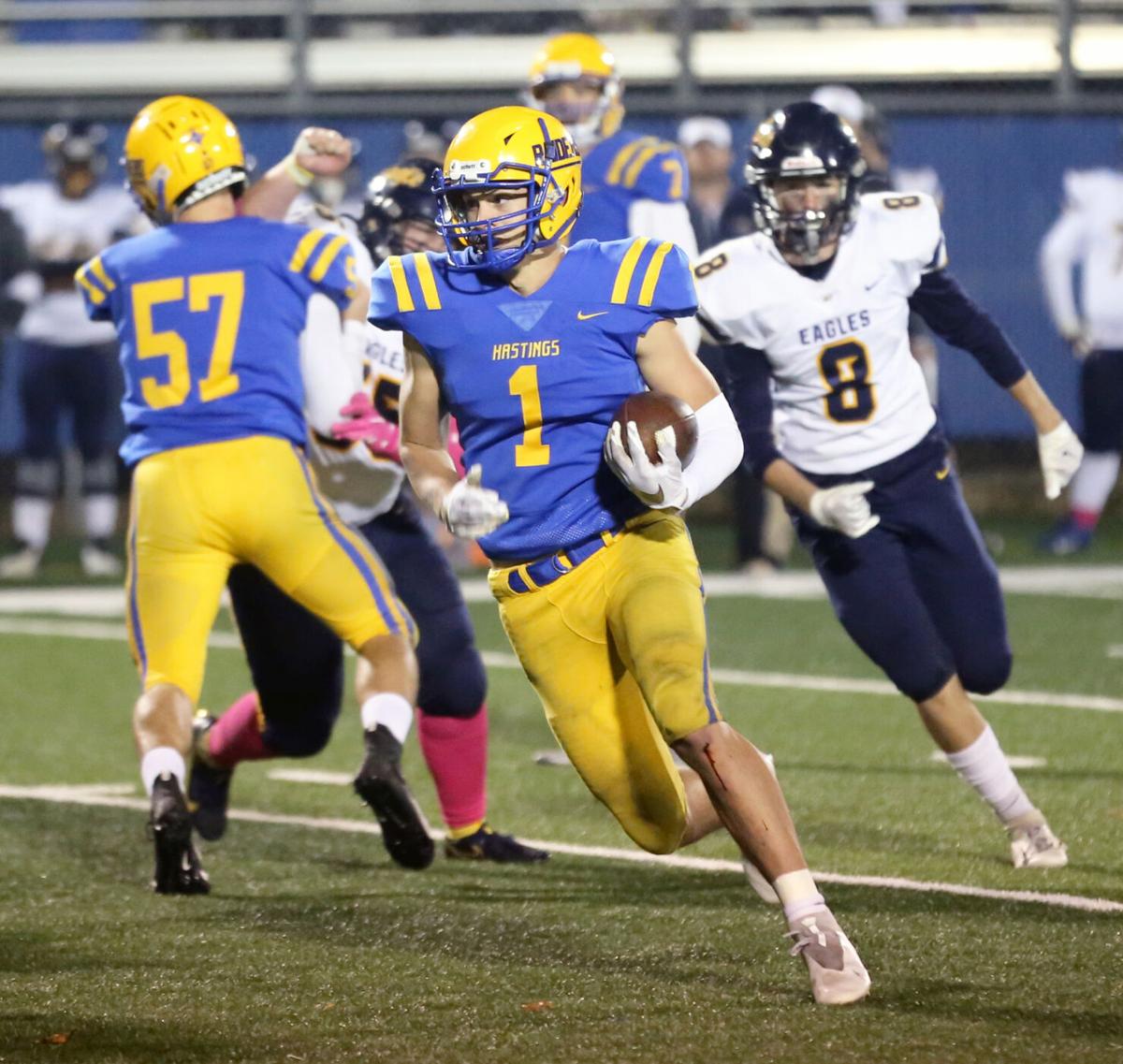 Senior running back Brenden Freiermuth ran for 147 yards and two touchdowns on 14 carries in the win over Bloomington Kennedy. He also had two long runs that set up scores. It was Freiermuth's third game in the last four with over 100 yards rushing. Alec Hamilton / Hastings Star Gazette

The Hastings Raiders football team ran all over the Bloomington Kennedy Eagles Saturday night to advance to the Section 3AAAAA championship game. The No. 2-seeded Raiders racked up over 300 yards on the ground and well over 400 total on the way to a 42-20 blowout of No. 3 Bloomington Kennedy at Todd Field/McNamara Stadium.

“It feels pretty good to win,” said junior Jonathan Bezdicek after the game. “It’s kind of sad because it’s the last time the seniors and us will be on this field together at once. So kind of soak it in, but it feels good to win.”

Hastings will now play Friday, Nov. 5, at the top-seeded St. Thomas Academy Cadets for the chance to go to state. The Raiders lost at St. Thomas Academy back on Sept. 24, 41-7. Hastings has not beaten the Cadets since joining the Metro East Conference in 2014 and moving to Section 3AAAAA in 2015.

The Raiders scored on the first drive of the game and led from then on. They received to start the contest and senior running back Brenden Freiermuth broke a 33-yard run, which set up a 9-yard touchdown pass from senior quarterback Axel Arnold to senior wide receiver Stephen Reifenberger. Reifenberger caught an out-route to the pylon and tapped his feet a la Cris Carter to stay in bounds for the score. The 2-point conversion was run in by Freiermuth and Hastings led 8-0 with 9 minutes, 15 seconds left in the game.

The Raiders scored again in the final seconds of the first quarter on a second touchdown pass from Arnold to Reifenberger, this time for 17 yards, and the extra point by senior Rhys Fillion was good. Earlier in the drive, Arnold hit senior John Chorlton for a 20 yard gain on a shallow crossing route that got the Raiders moving. Hastings led 15-0 at the end of the first quarter.

Bloomington Kennedy put together one decent drive in the first quarter that resulted in a turnover on downs just outside the Hastings red zone, which led to the second touchdown to Reifenberger. Outside of that, they were unable to do anything on offense until the end of the first half. After an Eagle punt at the start of the second quarter, Freiermuth exploded for another long run, this time for 37 yards. He then proceeded to score from 10 yards out and the Raiders led 22-0 with 8:27 left in the first half.

On the ensuing Bloomington Kennedy possession, Eagle quarterback Zachariah Zesch was strip-sacked by senior Will Meyer and the fumble was recovered by Hastings at the Bloomington Kennedy 32. The turnover turned the game into a rout as Arnold scored from 3 yards out and the Raiders led 29-0 with 6:16 left in the second quarter.

Bloomington Kennedy was able to put together a scoring drive at the end of the first half with a 2-yard touchdown run by Marques Monroe and 2-point conversion. This cut Hastings’ lead to 29-8 with 50 seconds left in the first half. The Raiders were able to get in field goal range before halftime, but the last-second 36-yard field goal attempt by Fillion was blocked.

The second half got off to a rough start for Hastings as Bloomington Kennedy ran the opening kickoff back to the Raider 6 yard-line and scored on a 7-yard touchdown pass from Zesch to Rayzion Walker. It was now a two-score game with Hastings leading 29-14 with 10:29 left in the third quarter.

However, the Bloomington Kennedy defense was incapable of stopping the Raider offense. Hastings responded with another scoring drive capped off by Arnold scrambling for a 21-yard touchdown to make it 35-14. After an Eagle punt, Arnold hit Bezdicek for a 20-yard touchdown pass for 49-14 lead with 3:03 left in the third quarter and the game was virtually over.

Bloomington Kennedy managed one more touchdown on a 62-yard swing pass to the flat after forcing and recovering a Raider fumble.

Bezdicek said they ran the ball really well and worked well together as a team, shown by the almost 500 yards of total offense and the video-game like numbers on the ground. Freiermuth led the Raider rushing attack with 14 carries for 147 yards and two touchdowns, his third game in the last four with over 100 yards on the ground. Junior Payton Burow made his return to the Hastings backfield and added 86 yards on 15 attempts. Arnold ran the ball eight times for 62 yards and two scores while Bezdicek contributed 22 yards.

Despite the lopsided score, Bloomington Kennedy never gave up. Zesch was 11-for-22 passing for 163 yards and two touchdowns.

“They were pretty tough, they made us work for it but we came out with the win,” junior wide receiver Rico Cooper said about the Eagles.

The Hastings passing attack was also clicking with Arnold completing 11 of 14 attempts for 149 yards and three touchdowns. Reifenberger led all Raider receivers with four receptions for 60 yards and two scores. Cooper added three receptions for 29 yards, Chorlton had two for 31 yards and Bezdicek had his 20-yard touchdown catch. Fillion was a perfect 4-for-4 on extra points.

Looking ahead to St. Thomas Academy, Cooper said Hastings needs to slow down the Cadets’ running game after giving up 281 yards on the ground in their last meeting. Both sides of the ball face a tall task as the Raider defense gave up 497 total yards to the Cadets and the Hastings offense managed just 18 yards rushing on 17 carries.